A collection of Maltese asylum case-law

The Compendium of Asylum Jurisprudence, Law & Policy – A Collection of Maltese Asylum case-law gathers the large collection of case-law decided by the Maltese courts and the European Court of Human Rights with respect to Malta in the field of asylum.

The Compendium is divided into six chapters. Chapter I on Procedural Issues takes into account the vast number of judgements that examined the nature of judicial review and constitutional review in the field of asylum and immigration, and the implications of challenging decisions by the Refugee Appeals Board and the Immigration Appeals Board.

The examination on the grounds for detention, the remedies available at law for challenging detention and judgments on detention in the light of claims of breaches of fundamental right are tackled in Chapter III.

Chapter IV explores the importance of access to the territory and surrounding issues, such as border control and the principle of non-refoulement, and related judgements. The age assessment procedure is examined in Chapter V.

Finally, Chapter VI explores the content of and access to associated rights of beneficiaries of international protection in the light of the available Court jurisprudence and Ombudsman decisions. 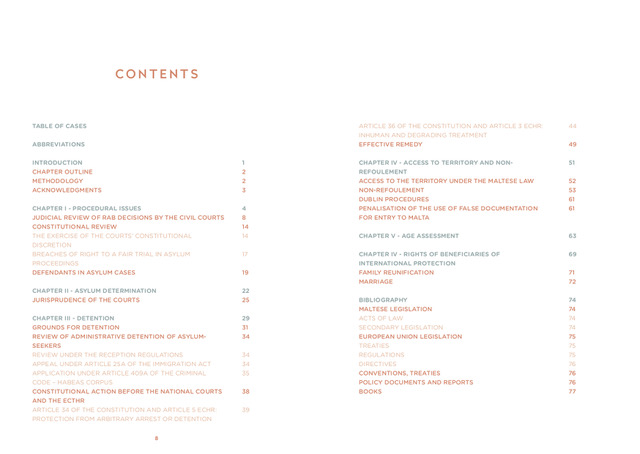 The Compendium is free of charge, however the costs of postage would need to be covered by anyone interested in receiving a copy by post. Charges for postage for both overseas and local postage for this publication is €3.50.  Payment can be made via a number of options: click here for information on payment.

It is important to indicate your name and include the word “Compendium” in the narrative of your transaction.  Please email: [email protected] for more information.

Ultimately, we hope that the Compendium strengthens the quality of those judicial decisions that determine the extent to which refugees are able to effectively enjoy their fundamental human rights.

We hope that readers of this Compendium will take from it the wealth of knowledge gathered in its pages, and also appreciate the struggles refugees face as they seek to secure their human dignity in Malta.

This publication has been funded through the Small Initiatives Support Scheme managed by the Malta Council for the Voluntary Sector.

We are gravely concerned by the Government’s decision to close Malta’s ports to NGO rescue ships. The consequences of this measure are potentially fatal, as the vessels will no longer be able to continue saving lives in the Mediterranean Sea.

Although supposedly aimed at ensuring respect for the law, this action directly undermines the protection of human life at Europe’s borders, making them even more dangerous for refugees and asylum seekers.

The irregular migration sea route from Libya to Italy, which has always been the most lethal route for irregular entry into Europe, is becoming increasingly perilous. According to a 2017 UNHCR report, the death rate amongst those crossing from Libya increased to 1 for every 14 people in the first three months of 2018, compared to 1 for every 29 people in the same period in 2017.  In 2017, the Central Mediterranean route accounted for 2853 out of 3139 deaths in the Mediterranean, while in 2018 it accounted for 635 out of 972.

NGOs saved thousands of lives in the Mediterranean between 2015 and 2018 – in 2016 they were the most important single Search and Rescue (SAR) actor, accounting for 26% of all rescues. They filled a huge gap in state search and rescue operations in the Mediterranean after Italy scaled back its Mare Nostrum operation in late 2014.

One of the inevitable consequences of the decision to close Malta’s ports to these vessels will be that more people will lose their lives attempting to reach a place of safety. This especially since EU states do not seem to have any plans to increase their search and rescue capacity in the Mediterranean, but intend to rely instead on the Libyan coastguard to conduct rescues.

The deaths of 100 migrants in the seas off Libya yesterday, after a Spanish NGO vessel was told that the Libyan coastguard was taking care of the rescue, highlights the deadly consequences of refusing to collaborate with NGOs and limiting their capacity to operate effectively.

Moreover, seen in the light of recent government statements stressing the need to allow the Libyan coastguard to operate without obstruction, the actions being taken against NGOs conducting search and rescue look like little more than a thinly veiled attempt to block refugees and migrants from leaving Libya.

It is impossible not to question the morality and humanity of a decision that will effectively trap people in an abusive situation, where their safety is anything but guaranteed. It is a well-documented fact that migrants in Libya routinely experience severe violations of their rights including rape, slavery, torture, ill-treatment, extortion and detention in miserable conditions. Not only, it is completely impossible for them to apply for protection there.

While it is no doubt important to secure our national borders, this can not, and should never be, at the cost of the life or safety of others, especially vulnerable people seeking refuge.

We therefore call on the government of Malta to urgently reconsider its decision and to allow NGO rescue vessels to continue to operate from Malta ports.

We also urge the government to support NGO rescue efforts not just by allowing them to use our port facilities but also by allowing rescued migrants to disembark in Malta pending a final decision on which countries will take them.

This press release is being issued by the following organisations: 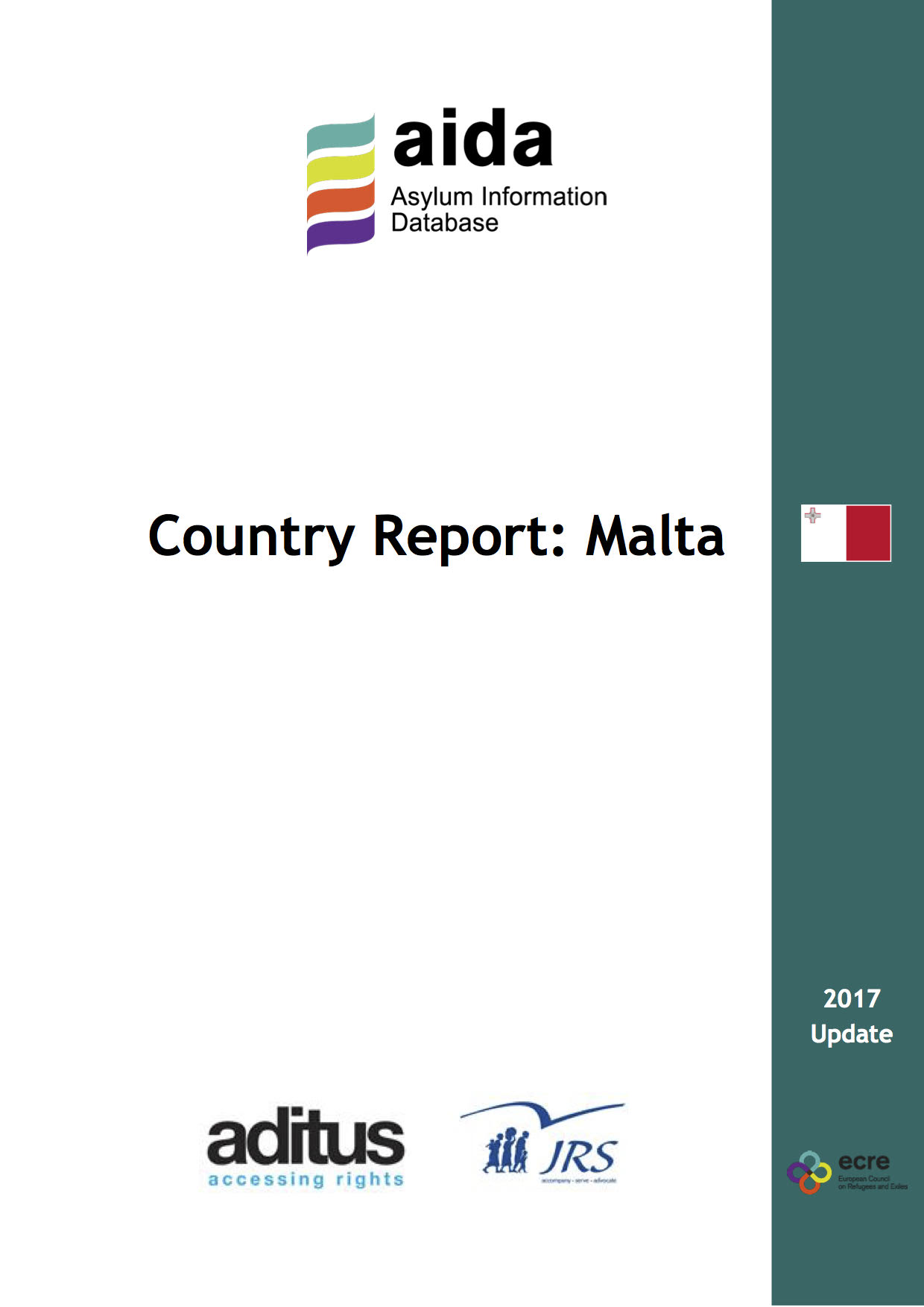 aditus foundation and JRS Malta are happy to launch the 2017 AIDA report.

The Asylum Information Database (AIDA) is a project of the European Council on Refugees & Exiles (ECRE), producing national reports on the situation of asylum in a number of EU Member States and covering key areas such as asylum procedures, reception conditions and detention.

It aims to provide up-to-date information on asylum practice in 23 European countries, which is accessible to researchers, advocates, legal practitioners and the general public. The database also seeks to promote the implementation and transposition of EU asylum legislation reflecting the highest possible standards of protection in line with international refugee and human rights law and based on best practice.

The 2017 AIDA report on Malta was jointly researched and prepared by aditus foundation and JRS Malta, and it was edited by ECRE. Together with the comprehensive overview of the asylum procedures and updated figures, the 2017 AIDA report highlights the changes in the way the Dublin procedure is now carried out in Malta, the use of accelerated procedures for applicants coming from safe countries of origin, the reception conditions at the Initial Reception Centre and the concerns remaining  regarding the detention of applicants for international protection.

The full report can be downloaded here.

Today the European Council on Refugees and Exiles (ECRE) published the country report covering all aspects of asylum in Malta. Published within the Asylum Information Database project (AIDA), the country report provides valuable information on legal and policy issues, as well as an insight into realities on the ground.

AIDA is a database containing information on asylum procedures, reception conditions, detention and content of international protection across 20 countries.

As with all country reports, the Malta report is the most comprehensive document on asylum in Malta, an extremely useful reference tool for law- and policy-makers, judiciary, NGOs, academics, etc.

The Malta report was prepared by aditus foundation and JRS Malta.

We hope you’ll find this report useful in your work, and thank all entities that provided information for our research.

In the implementation of their international obligations, European and EU states have devised sophisticated asylum systems based on complex procedural tools. In some cases, tools are designed and used for the purpose of avoiding responsibility for refugees, because they allow claims to be dismissed as inadmissible before looking at the substance of the claim.

The recent EU-Turkey deal and the European Commission’s proposal for harmonised asylum procedures under an Asylum Procedures Regulation, for instance, revolve around concepts such as “safe third country” and “first country of asylum”.

A report launched today by the Asylum Information Database (AIDA), managed by the European Council on Refugees and Exiles (ECRE), documents the limited and fragmented application of admissibility and safe country concepts in 20 European countries.

“The latest reform of the Common European Asylum System brings the concepts of admissibility, responsibility and safety to the forefront of European asylum procedures, by introducing an obligation on Member States to deem applications inadmissible on the basis of ‘first country of asylum’ and ‘safe third country’ grounds”, says Minos Mouzourakis, AIDA Coordinator.

“Yet such a move seems ill-fitted in the absence of evidence-based knowledge on the use and interpretation of these concepts throughout the continent.”

The recent introduction of broad lists of “safe third countries” in countries such as Hungary, as well as the pressure placed on Greece to apply the concept following the EU-Turkey deal, run counter to practice in countries with longer-entrenched safe country concepts in asylum procedures. Countries with longer experience, and often judicial guidance, in the application of the “safe third country” concept have clarified that an asylum seeker cannot be considered to have a “sufficient connection” with a third country merely on the basis of transit or short stay.

The report also discusses the implementation of the Dublin Regulation and the emergency relocation scheme, two instruments regulating the allocation of asylum responsibility within the EU. As far as relocation is concerned, despite extremely slow rates of implementation in Europe, countries such as France and Portugal have designed processes for the swift processing of claims by persons relocated to their territory and their allocation to the different regions where applicants will be accommodated.

Drawing on the AIDA report, ECRE calls on European countries and EU institutions to:

The overall goal of the database is to contribute to the improvement of asylum policies and practices in Europe and the situation of asylum seekers by providing all relevant actors with appropriate tools and information to support their advocacy and litigation efforts, both at the national and European level.

In Malta, the AIDA partners and researchers are aditus foundation and JRS Malta.

THE REPORT IS AVAILABLE HERE.