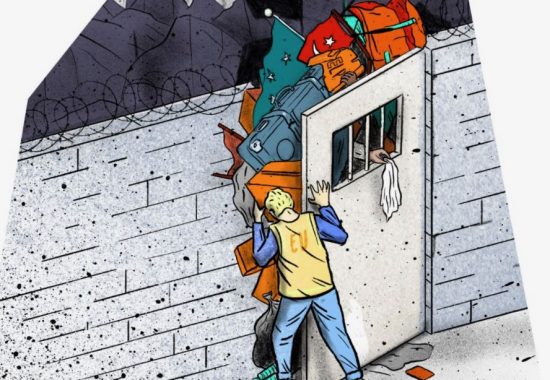 END_OF_DOCUMENT_TOKEN_TO_BE_REPLACED

On 23 June we joined 50 other human rights NGOs in signing a Joint Advocacy Letter Calling for Human Rights Council to establish an Independent Monitoring Mechanism on Pushbacks.

The letter was sent to all missions in Geneva ahead of the Interactive Dialogue with the Special Rapporteur on human rights of migrants. The session was held on the same day at 16:30 (CEST).

The practice of “pushbacks” is widespread and exists along most migration routes. Pushbacks manifest an entrenched prejudice against migrants and demonstrate a denial of States’ international obligations to protect the human rights of migrants at international borders.

END_OF_DOCUMENT_TOKEN_TO_BE_REPLACED

We are extremely concerned at allegations that Malta is complicit in the on-going illegal pushback to Libya of over 100 migrants. Returning migrants to Libya means returning men, women and children to severe human rights abuses, including arbitrary detention, violence and torture, inhumane living conditions, human trafficking and slavery. It is entirely unacceptable for Malta to even consider engaging in such activities in its efforts to reduce the number of arrivals of persons by sea.

Publicly available information indicates the presence of Libyan Coast Guard ships in Malta’s Search and Rescue Zone. Malta’s responsibility for persons in distress within our Search and Rescue Zone is to coordinate their rescue and ensure their disembarkation at a port of safety. As strongly reiterated by the European Union Commission and by the Council of Europe Commissioner for Human Rights, Libya is not a safe port for migrants. Malta’s engagement with Libya’s Coast Guard for this to pick up persons from Malta’s Search and Rescue Zone is tantamount to an illegal pushback as it will anyway result in the return of persons to a place where lives and human rights will be at risk.

END_OF_DOCUMENT_TOKEN_TO_BE_REPLACED

When rickety boats laden with irregular migrants reach our shores, we see the suffering and the loss of dignity etched on these people’s faces. We understand that they are caught in a web of poverty and exploitation.

We feel for those fleeing persecution and poverty, in search of safety and prosperity. And we do everything we can to provide them with the help they need, offering refuge and respite.

Herman Grech: Prime Minister, at the beginning of the legislature you considered returning to Libya a group of immigrants. Was that a mistake?

In the document, the Commission is called on to “examine how to interpret and apply” the legal implications of a key humanitarian rule that protects migrants from being returned to a country where they may have reason to fear persecution, the so-called non-refoulement principle.

Malta’s Presidency of the EU Council to the EU Commission, 2016.

Returning forced migrants to Libya or failing to rescue them from sinking boats would put them at serious risk of inhuman and degrading treatment and could threaten their very lives.

Last week, the Court of Appeal ruled that the forced return of two Somali nationals to Libya in 2004 violated their human rights. The ruling underscores the unacceptable nature of the government’s declaration that Malta does not exclude returning migrants to Libya when it is tragically clear from countless reports that they will be in serious danger if returned.

Several migrants who arrived in Malta on 4 July 2013 described the suffering they faced in Libya. Many were detained for a long time in very harsh conditions and faced severe abuse. At least one migrant was shot in detention. They said sub- Saharan African migrants are still targeted for abuse in a scenario of rampant violence and insecurity in many Libyan towns and villages, where firearms and other weapons are readily available.

Their accounts are confirmed by credible reports by human rights agencies, which document several instances of deportation, torture and ill treatment of migrants held indefinitely in Libyan detention centres. Little more than a week ago, Amnesty International reported that on their visit to detention centres in Libya they met many migrants, including women, who had been brutally beaten with water pipes and electric cables. Some were left permanently disabled by their injuries.

The appeal court judgement, like the Hirsi v Italy judgement of the European Court of Human Rights before it, stresses that governments cannot send people to a country where there is a real risk that they will face serious harm and claim they were ignorant of the dangers, when these were so well documented by credible international organisations.

As the court makes clear, every single person, whether or not she enters the country legally, must be protected from cruel, inhuman and degrading treatment, for the simple reason that she is a human being and has fundamental rights that cannot be denied.

The judgment illustrates that failure to offer this protection can have devastating consequences: of the six migrants returned to Libya in 2004 only two made it back to Malta. The rest died in the desert when they were deported to the Libyan border after months of imprisonment in terrible conditions.

While we support Malta’s calls for increased responsibility sharing in migration issues, we, the undersigned NGOs, call on the Maltese government to publicly commit to ensuring full respect for the life of each and every migrant who needs protection and for Malta’s international obligations.

This statement is being issued by the following organizations, and can be downloaded here: