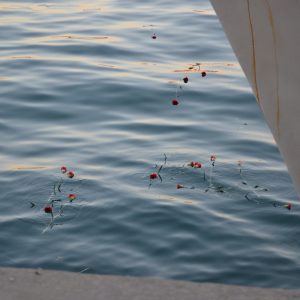 The video doc profiles the Migrant Offshore Aid Station (MOAS) founded by Regina and Christopher Catrambone and its efforts to compensate for the insufficiencies in search-and-rescue operations that are the result of European indifference to the plight of asylum seekers in the Mediterranean Sea.

Neil appears first at 8:55, speaking of the invasion mentality among Maltese that is the most palpable consequence of Malta’s relatively high refugee numbers. He goes on to speak of the deplorable material conditions in the centres wherein asylum seekers are inevitably detained upon their arrival in Malta — and especially how they have already been the subject of condemnation from the European Court of Human Rights, having been judged inhuman and degrading.

Neil affirms the historical and continuing reality of migration and proposes that the answer for Europe is to treat those seeking safety with more humanity and dignity, as well as to revisit reception and integration systems.

This morning our Director, Neil Falzon, was on One News together with UNHCR Malta, to discuss the recent death of a migrant whilst in detention.  The discussion gave us the opportunity to highlight some of our major human rights concerns with the way Malta automatically detains migrants found to be in an irregular situation.

“We’ve been expressing these concerns for years now, but it had to be someone’s death to shake the country out of this horrible impasse”, commented Neil.  We focused our intervention on the national shock that’s currently being experienced.

“When you talk of migrants in terms of numbers, using words such as ‘burden’, ‘expense’ and ‘unwanted’ you inevitably eat away at the person’s humanity, at his very dignity.  The recent violent beating was merely the climax of something that’s been brewing for years.”

We also reiterated that the European Court of Human Rights, together with other human rights agencies and institutions, has condemned Malta’s detention policy as clearly violating the European Human Rights Convention.

Later today, together with the other 9 NGOs endorsing the statement, we’ll be meeting the Prime-Minister to discuss the way ahead…fingers crossed!

This morning our Director, Neil Falzon, participated in the live programme Familja Waħda (‘One Family’) on Radju Malta (93.7) to discuss human rights.  “I’m happy that the phone-ins were actually very interesting, not the usual migrant-bashing,”  says Neil, after spending around 30 minutes discussing human rights with Ms. Lilian Maistre, the programme’s presenter.

The discussion, the second in an informal series of interventions, started off by looking at the universality of human rights, then focusing on how this universality is applied in the case of migrants, asylum-seekers and refugees.

aditus is often engaged in media interventions such as this one, as they offer an excellent opportunity to reach out to a broad public spectrum to raise human rights awareness and inform people of their right.  aditus also sees the potential of these programmes to counter xenophobic sentiment by providing accurate facts and perspectives.

The discussion will continue on 6th July at 11.15.

A few days ago we sent a list of general update queries to EASO, asking about the status of the premises, recruitment procedures and the Consultative Forum.  In response, I was invited to a meeting with Dr. Visser, Executive Director, and his advisor Ms. Lonneke Kapoen.

I just returned from a good introductory meeting, held in EASO’s current premises just seconds away from one of Malta’s open centres – Marsa Open Centre.  Mr. Visser explained that work on the official premises is not yet finalised, and he is expecting to move there with his team in about mid-2012.

EASO’s current team is in fact a very small one, with less than skeleton staff supporting Visser.  Following the recruitment calls (27 in all, also published on the EASO Monitor), EASO received around 2,500 applications…a possible sign of great interest in EASO’s activities.  The actual target is for EASO to have around 60 recruited staff-members by 2012, together with a group of seconded national experts (calls also published on the EASO Monitor), aiming to reach around 35 by the end of year and to reach staffing targets by end 2012.

We also had a brief discussion about the Consultative Forum, since it is definitely an issue we are all closely watching.  We agree that at the moment there is no existing perfect structure EASO can borrow for the Forum, so Visser’s conducting an exercise of evaluating current systems with a view of adopting the positive elements whilst trying to avoid or improve the negative ones.

The Director repeatedly stressed the importance EASO will give to NGO contributions, particularly in view of their technical expertise that can be seen to complement the experience of the MS.  For this happen, Visser seems to be trying to find a Forum model that will on the hand be an inclusive venue whilst simultaneously ensuring that quality NGO expertise is efficiently channelled.

I raised the concern we’ve often shared that EASO seems to be perceived as the saviour of the Mediterranean region, with its support of EU MS facing ‘particular pressures’ being given much more importance than its other responsibilities.  The EASO Monitor has repeatedly stressed that we’d rather see EASO focus its energies on a more long-term approach, primarily by focusing on finalisation and appropriate implementation of CEAS.

We’re glad to confirm that Visser is also of this view.  Whilst the need to support MS facing difficulties, he reiterated his position that EASO can truly offer added value if it focuses on a “permanent support system” building on a “community of values”.  To do this, Visser identifies the following as key target areas:

Being an introductory meeting, I avoided entering into many details.  Of course, I would have loved to discuss the Greek situation as well as Visser’s views on EASO’s possible impact on the northern EU MS.  There will definitely be time for that at a later stage.