How do Cross-Border Human Mobility and Human Rights tie in with Disasters, Climate Change and Environmental Degradation? What measures must be taken in order to minimize the risks posed to travelling migrants by the symptoms of climate change?

On the 24th September, the Platform on Disaster Displacement, Caritas France, Act Alliance, the International Catholic Migration Commission (ICMC) as well as Caritas Internationalis hosted an event ancillary to the 45th Regular Session of the Human Rights Council, in a bid to stimulate and encourage discussion with governmental authorities and civil society with regards to the way forward when tackling disasters, climate change and environmental degradation in terms of human mobility. The primary question considered was: How are states required to react in order to ensure that the human rights of migrating individuals are protected accordingly?

END_OF_DOCUMENT_TOKEN_TO_BE_REPLACED

On 12 November, I was in Brussels to attend the 9th EASO Consultative Forum Plenary Meeting. This meeting is a gathering of NGO representatives from all Europe, stakeholders from Member States, European Union officials (EASO and European Commission) and the United Nations (UNHCR).

This year’s Forum was focused on the initial steps in the asylum procedure and the aim was to exchange knowledge from different types of stakeholders.

We heard different panel discussions from experts stressing key considerations, with the opportunity to present questions on issues we’re all facing in our work. Civil society, Member States and European institutions officials had a chance to express their views and hear each other.

Final recommendations from the different workshops focused on outreach and information, registration, and channelling of applicants with special needs.

This gathering is a great opportunity for everyone to learn more, exchange and get inspired in order to do a more appropriate and fairer work. I sincerely thank EASO for supporting my participation at this meeting!

At the end of August (28-29), I attended a workshop on hate crime organised by the OSCE Office for Democratic Institutions and Human Rights (ODIHR).

ODIHR provides support, assistance and expertise to participating States and civil society to promote democracy, rule of law, human rights and tolerance and non-discrimination. It observes elections, reviews legislation and advises governments on how to develop and sustain democratic institutions. The Office also conducts training programmes for government and law-enforcement officials and non-governmental organizations on how to uphold, promote and monitor human rights.

The aim of the workshop was to familiarise civil society organisations with the concept of hate crime, especially in the context of migration, and introduce ODIHR’s work on reporting and addressing hate crimes in Europe.

This workshop was important for us all at aditus foundation, since we are searching for betters ways to support our beneficiaries when they are victims of hate crimes. In particular we are extremely concerned that, whilst we do know of hate crimes occurring in Malta, reporting levels remain extremely low…almost at level zero. My participation was funded by UNHCR Malta, for which aditus foundation is extremely grateful.

END_OF_DOCUMENT_TOKEN_TO_BE_REPLACED

On Friday evening and Saturday morning, Neil (our Director) delivered legal training to integration educators, engaged by the University of Malta to deliver cultural orientation classes to migrants and refugees.

Following Government’s adoption of Integration=Belonging: Migrant Integration Strategy and Action Plan, the Integration Unit within the Ministry for European Affairs and Equality has been making steady progress towards implementation of the country’s integration agenda.

In particular, free classes in English and Maltese have already started, as part of Stage 1 of a migrant’s integration path. Stage 1 also includes basic cultural and societal orientation, and a record+assessment of qualifications, trade and work experiences.

END_OF_DOCUMENT_TOKEN_TO_BE_REPLACED

On 12 October aditus foundation, Kunsill Nazzjonali Żgħażagħ, The Malta Independent on Sunday editor David Lindsay attended the UPR pre-session on Malta to give their feedback and recommendations on the state of human rights in Malta as they stand.

The UPR pre-sessions are attended by States’ missions to the United Nations, based in Geneva, with a view to gathering information in preparation for the upcoming review of a State’s human rights performance. Malta’s review is set for 14 November 2018…we’ll be following closely!

(Don’t know what the UPR is, or why we think it’s an important human rights process? Read our earlier blog post.)

So, who said what at this pre-session?

Neil was present as Director of aditus foundation but also as Head of Secretariat of the umbrella organisation Platform of Human Rights Organisations in Malta (PHROM).

He started his presentation by highlighting the significant progress made by Malta in several areas since the last UPR, such as the adoption of the Integration Policy (2017) as well as amendments made to the immigration detention policy.

Statelessness was an issue discussed in depth by aditus foundation, also in the shadow report presented to the UPR process. In this regard, Neil reiterated concerns expressed in the Statelessness Index, namely:

Neil further noted the challenges faced by refugees and migrants in accessing Europe safely and legally, emphasizing that safe and legal pathways need to be introduced. He also stressed the need for Malta and Italy to stop bickering on Twitter and to find a way of resolving their legal and political disagreements regarding rescue at sea of migrants.

aditus foundation pleaded that Ħal Far Tent Village urgently needs to be replaced with housing that is community-based and equipped with basic material supplies. In relation to immigration detention, Neil noted that some instances of deprivation of liberty need to be aligned with international human rights standards.

Finally, on the migration theme, Neil urged Malta to remove the arbitrary prohibition of civil marriages for undocumented migrants.

Neil then spoke on the rule of law, mentioning examples of institutionalised nepotism, kickbacks and other forms of corruption. Neil finally stressed the importance of establishing a public inquiry looking into the brutal assassination of the journalist Daphne Caruana Galizia.

David Lindsay, Editor of The Malta Independent on Sunday, spoke on behalf of Pen International, Reporters without Borders, IPI (International Press Institute), The Committee for the Protection of Journalists, The European Centre for Press and Media Freedom, and Article 19.

He stated that during the last UPR session, no recommendations were made on freedom of speech, yet Malta’s situation degenerated enormously. He underlined how Daphne Caruana Galizia’s brutal assassination on 16 October 2017 has left trailing behind it a climate of fear.

David reminded his listeners that a makeshift memorial set up in her memory has been cleared over 20 times by government officials in the thick of the night.

David reiterated Neil’s recommendation by calling for an international public inquiry that would establish whether her death could or should have been prevented.

David said that PEN welcomed the decriminalisation of defamation under the new Media and Defamation Act adopted in 2018, yet also mentioned serious concerns in relation to this new law, particularly that the burden of proof remains with the defendant, including in cases initiated by senior members of the government.

In addition, libel suits may be passed to heirs. To highlight this, David mentioned how Daphne Caruana Galizia’s family inherited a total of 33 civil libel suits, all instituted by senior public officials against Daphne herself.

Lindsay lamented that 2017 was the year Malta was introduced to Strategic Lawsuits Against Public Participation (SLAPP), as a way to censor and silence journalists and media houses by slapping them with exasperatingly high-cost legal fees. David expressed the fear that these methods are aimed at preventing the media from practicing its right to inform the public about matters of general interest.

David urged the UPR to recommend the prohibition of recognition of foreign defamation judgments, in order to protect Maltese journalists from SLAPP and libel tourism.

He concluded by stressing the importance of having a public inquiry looking into Daphne Caruana Galizia’s assassination.

The General Secretary of Kunsill Nazzjonali Żgħażagħ, Sean Ellul, tabled the KZN’s UPR recommendations, focusing mainly on sexual and mental health issues. Sean noted that, although Malta does offer free STD and STI  testing, it is quite hard to access these due to a long waiting list of up to several months.

This means that a good part of the population remains untested: over 25% of individuals suffering from HIV are unaware they are HIV positive.

KNZ recommends that a standardised, holistic national policy on sex education is established, that incorporates both formal and non-formal education. Further investment in quality sexual health clinics and services is also needed. Self-testing and the distribution/educational use of contraceptives among youths need to be made easier and simpler.

With regard to mental health, Sean highlighted the situation in Mount Carmel Hospital by referring specifically to the young man who was discovered dead after he had fled the hospital. Sean underlined the need to overhaul this institution, also referring to the need for further public education and awareness-raising.

KNZ commented on the Maltese legal and judicial system, where a survey carried out just after Daphne Caruana Galizia’s assassination showed that 53% of Maltese citizens lacked trust in the system. In line with aditus’ own earlier recommendation, KNZ recommended the establishment of an independent National Human Rights Institution in conformity with the Paris Principles.

This post is part of a series of posts on the Universal Period Review process. Malta’s review, where the country’s human rights situation will be assessed by other States, is set for 14 November 2018.

Follow our News and Updates to be kept updated on this important United Nations procedure. 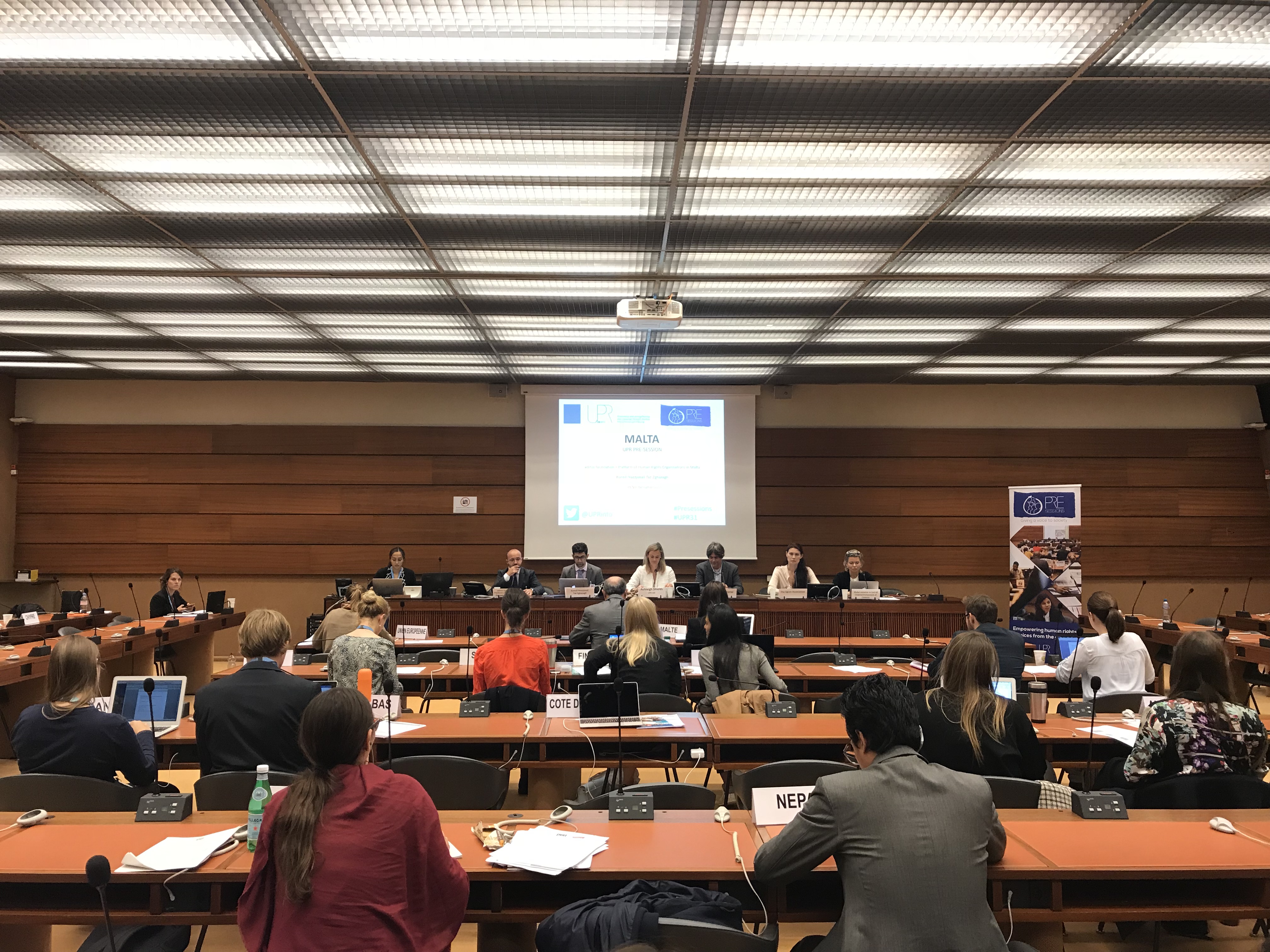